Satan’s 3 Offers To The Jews 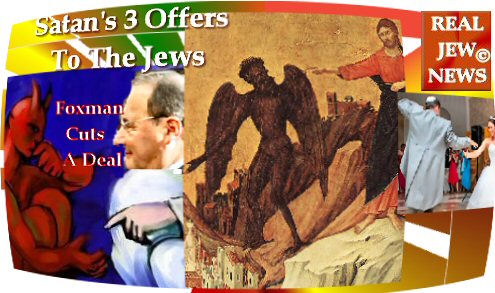 SATAN’S 3 OFFERS TO THE JEWS
By Brother Nathanael Kapner, Copyright 2008-2011

Yet Satan was rebuffed by Jesus the Messiah on all 3 points:

1) Satan’s Offer Of Possessions: “Command these stones to become bread.”

Jesus’ Reply: “Man shall not live by bread alone but by every word that comes out of the mouth of God.” (St Matthew 4)

2) Satan’s Offer Of Prestige: “Cast thyself down from this pinnacle so the angels can rescue you.”

Jesus’ Reply: “Thou shalt not tempt the Lord thy God.” (St Matthew 4)

3) Satan’s Offer Of Power: “All the kingdoms of the world I will give unto you if you fall down and worship me.”

Jesus’ Reply: “Get thee hence Satan, for it is written, Thou shalt worship the Lord thy God, and Him only shalt thou serve.” (St Matthew 4)

But the Jews crave: 1. Possessions 2. Prestige 3. Power.
Their “kingdom” is indeed of this world. 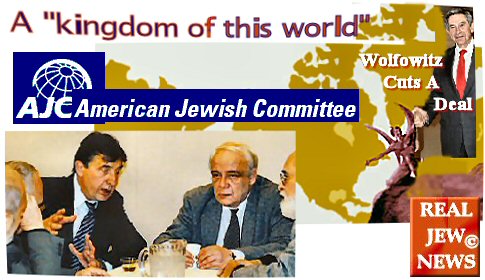 JEWS LIVE FOR THE THINGS OF THIS WORLD

JEWS CRAVE POSSESSIONS. Jews don’t believe what Jesus taught, “Take no thought for your life what you shall eat and what you shall put on.” (Sermon On The Mount)

~ Possessions give the Jews their security. For the Jews are basically a paranoid people with no sense of belonging amidst the “goys.”

Satan offers the Jews “bread alone” & the Jews have accepted his offer.

JEWS CRAVE PRESTIGE. Jews live for the glamour of this world. And Jews desire “glamour” for their children as well. A Jew’s
“immortality” is bound up in his children to carry on his name after he dies and rots in the earth.

~ Indeed, Jews want their children to be doctors, lawyers, and CEO’s. This enhances the Jew’s “prestige” and guarantees him a place in the annals of society and history but not eternal life. Jews don’t care about eternal life. No, not at all.

Satan offers the Jews “immortal prestige” & the Jews have accepted his offer.

JEWS CRAVE POWER. This is why there exists a “Jewish Democratic Committee” and a “Jewish Republican Committee.” This is why the Jews bribe politicians like John McCain, Barack Obama, and Hilary Clinton with millions of dollars in donations. Simply put, Jews don’t like to take orders from anyone.

~ Jews want to give orders not take them. This is why the Jews run the Central Banks in America, England, France, and Germany.

Satan offers the Jews “kingdoms of this world” & the Jews have accepted his offer.

ONLY CHRISTIANITY CAN BREAK THE JEWS

JEWS FEAR CHRISTIANITY more than any other thing. This is because Christianity puts Christians on top and Jews on the bottom. Jews fear this.

Americans must tell the Jews that Christ’s teachings are all about a “kingdom to come.” This is why the Jews lobbied to take prayer out of public schools. For as American children we once prayed, “Thy kingdom come.” (The Lord’s Prayer) But the Jews ended all of this.

Yet we Americans can live for Christ’s “kingdom to come” once again.

We Just Have To Stop The Jews
& Their Master “Satan” From Ruling Our Nation!

For More See: “What The Jews Fear Most” Click Here

And: “Why The Jews Hate Jesus Christ” Click Here