“HE’S FIVE FOOT TWO, and he’s six feet-four, he fights with spread sheets and with pens,” would sing a modern day Donovan.

And a modern day Flannery O’Conner would script a character saying, “Since there’s no real Jews they prop up artificial ones.”

If it’s true that he’s all of fifty-one, and only seventeen, you’ll see more cover stories on the likes of Gary Cohn of Goldman Sachs and Marc Zuckerberg of Facebook.

They are iconic Jews, (’Jews are smart and spectacular entrepreneurs,’ that is, they’re funded out of the synagogue’s treasuries), and Alan Dershowitz—’a good Jewish lawyer that will get you lots of money from a car accident’—says they should shout it out.

But there is nothing hidden that won’t be revealed, and a lie is for a moment.

The lie the Jew hides is that he is neither patriot nor partisan of his host country, but rather belongs to an international ring of racial supremacists and artificialists.

The Jew hates all that’s genuine.

Any country with noble aspirations, moral goals, religious polities–(like Russia)–he’ll bring all his artificial influence to bear in order to destroy it. 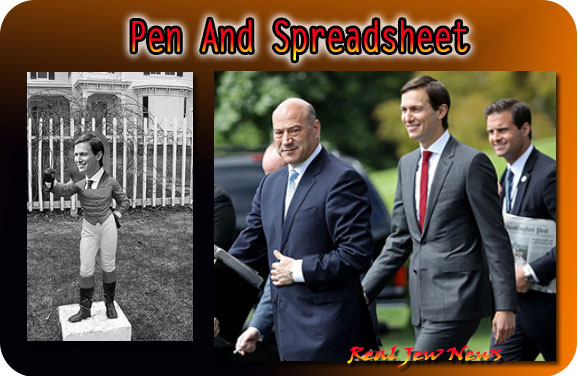 THE JEW HAS NO COUNTRY to die for, (save sending goys to die in wars for Israel.)

He has no religion too, just a bastardized version Old Testament figures who’ve been multi-layered into a rabbinic sluice of kosher beef.)

Dershowitz is no pioneer. His rabbinic forefathers knew how to write a law and find 21 different ways to get around it so as to make others look like they’re the ones breaking the law.

The Jew’s mode of rabbinic argument, pulpil, a manner of rabbinic legal argument, began with Rabbi Akiba of the 2nd Century AD whose students argued the Ten Commandments into the opposite of their actual meaning.

And the Kabbalah and Zohar are nothing more than ancient Greek philosophy, with a Jewish ‘occult’ twist.

THE JEW CANNOT EXIST on his own. He lives by the sweat of the Gentile. He owns the cleaning company but doesn’t do the cleaning; he owns the kibbutz, but Arabs do the gleaning.

Except for the ancient communities of Oriental Jewries (Iranian, Yemeni, etc), the Jew has no culture of his own, but rather, his land, his clothes, his food, his music, even his math, (from the Arabs), is either stolen or borrowed (but not returned.)

He’s the universal Jew and he really is to blame, his orders come from far away and more…

…they come from here and there, not you and me, and brothers can’t you see, he’s thoroughly artificial (he imports many others) and this is not the way we put an end to the ruination of the Western world.

And: How Jews Talk Here

And: Why Judaism Is Bankrupt Here

And: The Wagner Hitler Loved (And Jews Hate) Here

And: Why Don’t The Rabbis Believe In Jesus? Here

And: What Does It Mean To Be Jewish? Here