Talk To A Russian Lately? 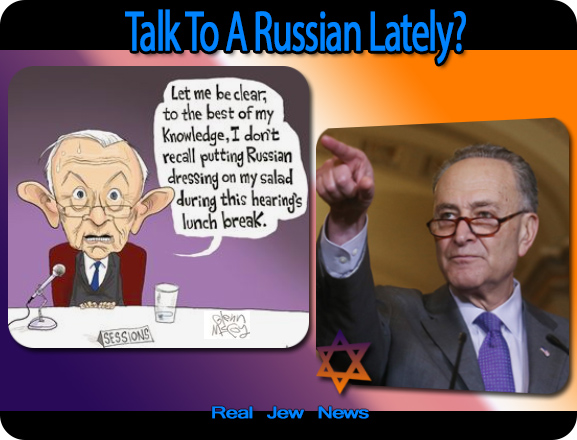 DEAR DIARY, I had to laugh when I saw the Democrats trying to nail Sessions for talking to the Russian ambassador.

I knew the Jews would be jumping all over this, for just as they crucified Christ, they’d be calling for the blood of Jeff Sessions.

Leading the pack to drag Sessions to Pilate, was the same hooked-nose Judas, this time, Chuckie Schumer.

“I felt a knot in the pit of my stomach,” barfed Schumer, “when I read the revelations regarding Sessions’ contact with the Russian ambassador. I worried about the future of our country with foreign influence in our elections. It goes to the very wellspring of our democracy. Sessions should resign,” Schumer vomited.

Never heard a peep out of Schumer when Netanyahu went to bat for Romney, slighting Obama, in the last election. “Knots in stomachs” only occur when a goy needs to be nailed.

And what’s all this crying about assaults on the very wellspring of our democracy? Isn’t it obvious to anyone paying attention that “democracy” is awarded to the highest bidder?

Money and Media decide who gets a shot at being elected to any political position.

And who has the money? JEWS. Who owns the media? JEWS.

But sometimes I feel like I’m talking to a wall. Paul Craig Roberts calls media moguls “presstitutes.” And others say the media is “corporate owned.”

My answer to them: Jews in the press do not “prostitute” themselves for their fellow Jews who own Capitol Hill.

And assigning “corporate ownership” to the media is a journalistic cover for fear of the Jews. 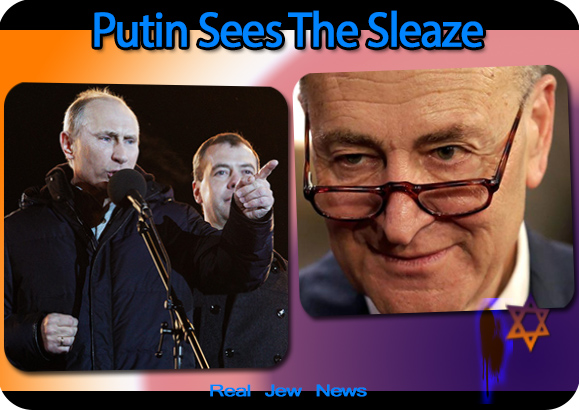 GETTING BACK TO TALKING to a Russian, well, I talk to Russians all the time.

As a member of the Russian Orthodox Church, my conversations include both personal and political issues.

I have to laugh when I see articles by Paul Craig Roberts or the Saker placing Putin and Medvedev in opposing camps: “Nationalists (Putin) versus “Atlanticists” (Medvedev)…BULL.

Putin mentored Medvedev during his government service days in St Petersburg in the early 90’s. They’ve been in sync ever since.

And both Roberts and Saker (faker) don’t have a clue when surmising that Putin is bamboozled by his desire to work with the US, restraining him from taking effective action against ISIS and other global concerns.

LAST TIME I TALKED with a Russian, (a high ranking priest with the Russian Church), I was told that Putin knows who runs the show in Jewmerica, and with that knowledge, plays his cards close to his chest.

Jewmerica—yes even Trump—wants a US military base there in order to fracture the Iran-Syria-Hezbollah “Axis of Resistance” against Zionist aggression.

Yet, Putin is silent. Is he bamboozled? Ha, ha, ha. He’s plans on blocking it if necessary. But he ain’t telling Jewmerica.

The future belongs to them. While Jewmerica moves steadily downstream.

And: If Putin’s A ‘Killer, America’s A Butcher Click Here