Confessions Of A Frequent Flyer 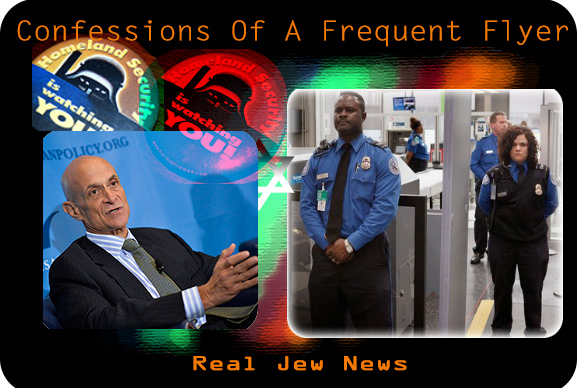 IF YOU’RE TEMPTED to get angry with TSA agents it’s best to bite your tongue.

They be employees now of a huge franchise whose figurehead Jeh Johnson is a New York Jew crowd schwartza who carries water for the rest of the Jews (Chertoff, Lieberman, Fischer, Netanyahu, et all) who own the Homeland Security franchise.

Yes, Fischer of the Fed is part owner since he cuts the checks for the entire security apparatus which includes the TSA, DHS, NSA, and oh yes, the US military.

And yes, Lieberman is part owner since Jews never retire.

And you better believe that IsraHell is part owner enjoying a big piece of action at DHS.

Now, if you find yourself watching your luggage being ransacked by a former McDonald’s worker it’s to teach you a lesson:

You’ve been selected to experience the great leveling process that puts you at the mercy of a person whose IQ is light years downward from your upward educated self. This is what Obama calls “transforming” America. He learned it from the Jew, Saul Alinsky, in his book, “Rules For Radicals.”

You’ve been selected to experience the legal fiction that as a private citizen you possess sole rights to your property. It’s all make believe with the proverbial “founding fathers” icing on the cake. Franklin’s been replaced by Fred Kagan, and Jefferson’s been replaced with Jacob Lew.

You’ve been selected to experience strange paws on your underwear, socks, and wallet, all free game in the land of the frisk. This is part of the Jewish hoax called the “War On Terror” which makes every white citizen suckers for Jews to “protect” while piling on laws to bend them to their will.

You’ve been selected to experience what every TSA agent knows, that your luggage he’s ransacking is not carried by a terrorist. Chertoff and Lieberman know this too.

The former gets to go home with the thought that while keeping his job safe, (and as he imagines, an airplane), he takes satisfaction that the superior person he frisked got his debut in indignities, (and, as he doesn’t imagine in his entitlement-empowered self), at the passenger’s disempowered taxpayer’s expense.

And the latter, (Chertoff and friends), gets to say out loud while in synagogue, “I thank you, oh God, that you have not made me a Gentile. 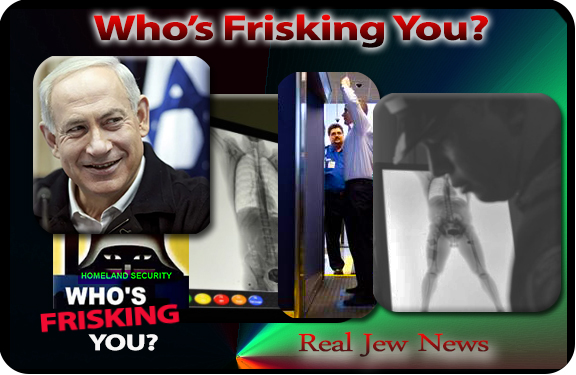 NOT OPTING OUT is never an option since surrendering with hands up means Chertoff, Lieberman, Bibzy, and Fischer got you under their Jewish thumbs.

Every goy who doesn’t opt out succumbs to Jewish hegemony over their bodies and souls. I wince every time I see it and say, “No wonder the Jews call them dumb goys.”

Speaking of which, if airports are a microcosm of intellectual demographics, then one is left with a sense of utter hopelessness that this country can ever be saved.

Try it next time you travel. See if you can find one intelligent face among the crowd of the fattened masses. I once did and started up a conversation.

Behind the facade was a card-carrying Fed-lover (a consultant to banks) who was absolutely certain (and very self-assured that it must be that way or his job has no use) that the US economy was doing just fine.

When I asked why so many US manufacturers were now in China, India, and Mexico, he said that there were plenty of manufacturing jobs still operating in America.

When I asked, how can pizza and hamburgers keep our economy going?…I drew a blank.

I was stuck with the know-it-all ‘economist’ for the rest of the trip. 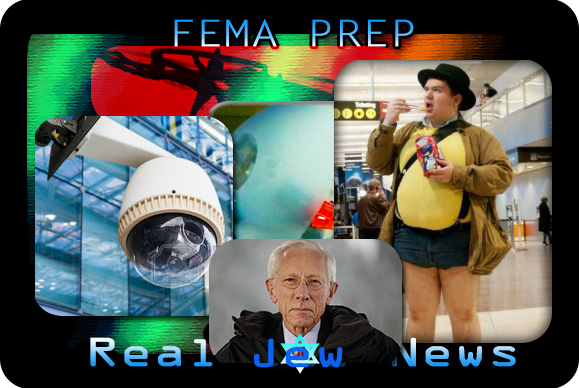 AT THE LAYOVER, I had to use the men’s room, a urinal. I never eat when traveling. I assume the goyim haven’t a clue that hidden cameras overlook the toilet stalls.

Which brings me to another invasive point. Do the goys see the signs, “This Airport Is Under Audio Surveillance?”

I always look around to see if it bothers anyone.

But the masses are eating their fries and fattening up for the slaughter.

All is right with the world as long as their stomachs are full.

That’s why the Fema camps will have Dunkin Donut concessions and wide screen TVs. The airports are a prepping stage for their totalitarian future engineered by Fischer and friends.

But I keep on hearing, “People are waking up, they’re starting to know what’s going on.”

Well, yes, at airports, they are woken up.

They’re in their pajamas lined up at Au Bon Pain while the alarm just keeps on ringing.