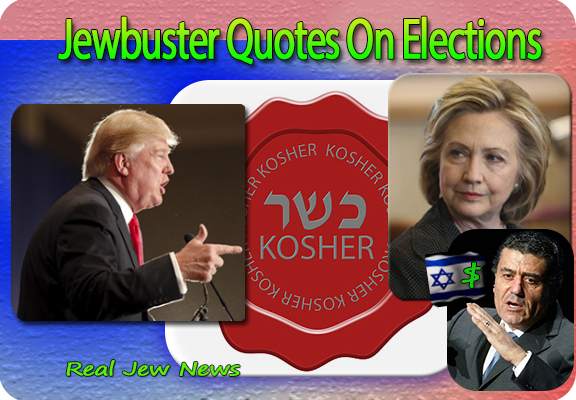 “ELECTIONS ARE LIKE a Jewish grocery store. Both Jew and Gentile shoppers eat products stamped with the Kosher Seal.”

“Americans have a choice between two candidates who are both funded by Jews. The one by Sheldon Adelson, the other by Haim Saban. It boils down to what flavor of Jewish control you want.”

“If elections give voters a contrasting choice of candidates, then we have a free press. But if the choice is selected by the chosen then the likes of a Ron Paul, a Pat Buchanan, and a Ross Perot, will remain forever as also-rans.”

“Both candidates for president are funded by Jews. For those with high expectations, Israel is about to become greater than ever.”

“We’re at a crossroads between hope for change and hope to keep the status quo. We can either change our enemies or remain enemies of the same. Both candidates will prove friends of Northrop Grunman.”

“Americans may never elect a Jewish president, it’s against the American way. But every American watches TV and bending the mind is what Jewish scriptwriters do best.”

“IF MEXICO is going to build a wall, who will tear down the wall in the West Bank? But Making America Great Again is without a compass to guide it.” 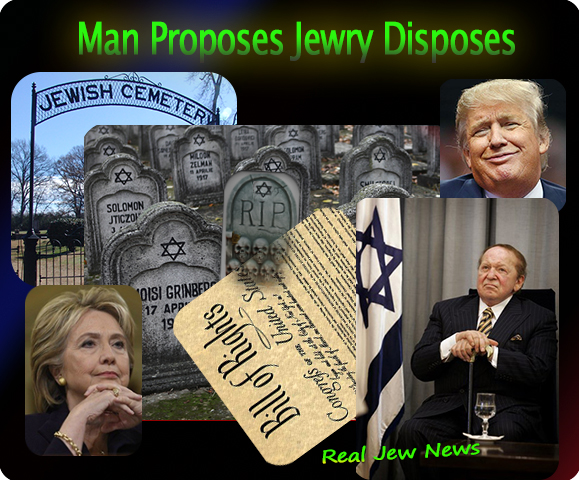 “ONCE THE DAMAGE is done it’s hard to repair. We could re-elect morality but Jews block a principled man from the ballot box.”

“Some say Netanyahu should be president even though Trump and Clinton want the position. Every rose has its thorn, and with a different name, still smells the same.”

“How many neocons does it take to change a light bulb? Ten, a Minyan. First they break the old one, screw in a new one, and thank God they’re not Gentiles. That bulb isn’t the only one getting screwed.”

“Some say neoconservatism is a Jewish affair. Others say it’s a state of mind. Jews dressed up as Republicans emit a deadly fume that seeps through the doors of Democrats. Adelson and Saban belong to the same synagogue.”

“Bar Mitzvahs are for Jews only, yet Gentiles are invited to the brunch. Woodrow Wilson was the first to have Bar Mitzvahs catered by the White House and have income taxes pay for it.”

“IF MEXICO is going to build a wall, who will tear down the wall in the West Bank? But Making America Great Again has Sheldon Adelson to guide it.”