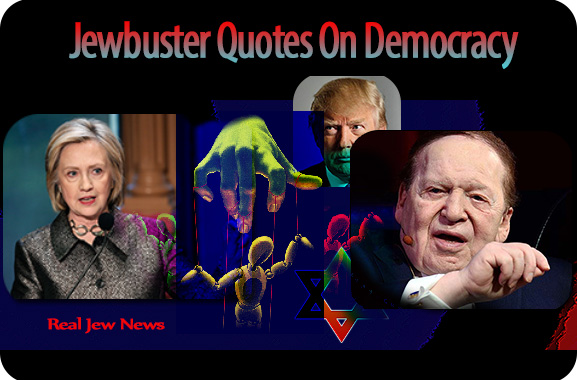 “IF DEMOCRACY IS AWARDED to the highest bidder then the Sheldon Adelson primary is all that counts.”

“If democracy can be bought then the logical ticket is Adelson as President and Trump as VP.”

“A small crowd is easily skirted unless it owns the bank. I have seen sages begging bread and thieves printing money out of thin air.”

“The synagogue is open for business even on the Sabbath. He that hath ears to ear let him hear how dollars fall out of thin air into Jewry’s lap.”

“The devil never sleeps save one day a year. When Tuesday follows the first Monday of November he celebrates Jewry’s triumph.” 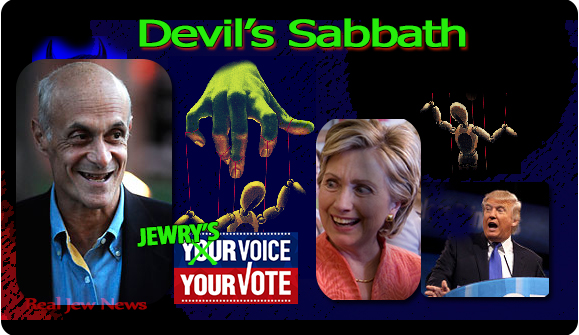 “BOTH PARTIES HAVE have the same master. You cannot serve God and mammon.”

“If politics determine one’s eternal destiny, then narrow is the way that leads to destruction and few there be that find their way out of Jewry’s claws.”

“If elections are an advance auction sale of stolen goods, then government by two percent of the population seizes the spoils of the Gentiles. Those who think the Fed is federal die in their chains.”

“If a rich Jew says he supports a candidate because he’s of the same party, be assured his money will produce a candidate that touts the party line.”

“If a candidate is good for business and Israel too, he’ll get all the Jew-owned TV coverage he needs.”

“Those who call the Trump campaign a white man’s movement are either working for the Jews or stupid. The Protocols don’t call the gentiles goys for nothing.”

“ONCE YOU KNOW who elevated a candidate to a high position then you know how low he or she has stooped to kiss the feet of the Jews.”