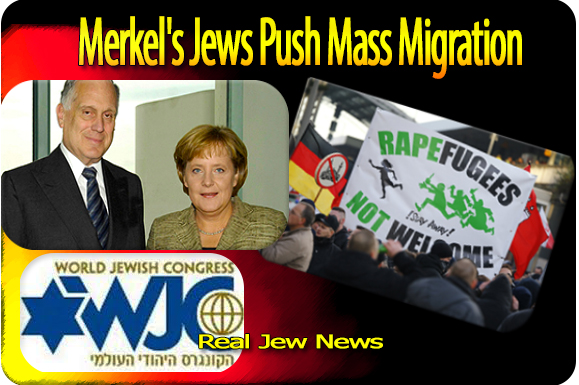 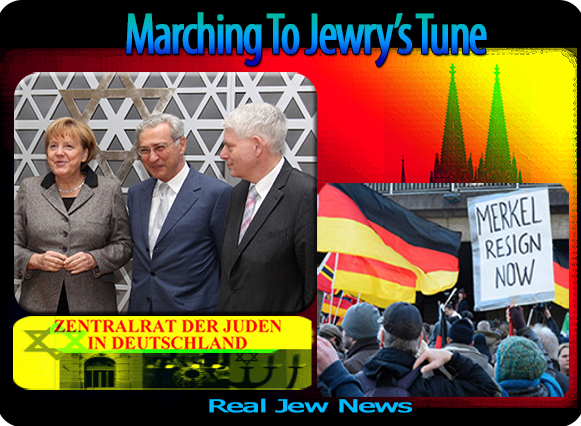 THE POWER OF GERMAN JEWRY has Merkel in a box. For what the Jews want, Jews get.


In a Die Welt feature article, “We Jews Know How Bitter Escape Is,” Ronald Lauder of the World Jewish Congress and Dr Josef Schuster of the Central Council of Jews in Germany, attacked Germans who oppose mass migration by non-whites as “neo-nazis.”

Applauding Germany’s progress in developing an “open society,” lauding it as “good for Jewry,” the authors then demanded Merkel to increase the flow of migrants.

Surely, the occupation of Germany by Jewmerica continues as Merkel listens to Jews more than Germans in her pursuit of mass migration of which seventy percent are single men.

But Lauder and Schuster have a remedy for that.

By subjecting the migrants to a “re-education program” that instills “Germany’s raison d’état” in their souls, the Muslim migrants will be “Germanized” and all will be well.

Problem is, Jewry’s definition of “Germany’s raison d’état” (Read: “Jewry’s national interests”) is support of Israel and assent to the Holocaust narration. 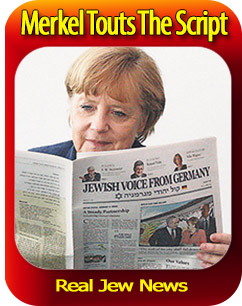 This is a political ploy to strengthen the bond between “Germans” and “Jews” by using the migrants and their “Arab anti-Semitism” to Jewry’s advantage.

Schuster warned Merkel that “respect for the values enshrined in the Constitution (actually, The Basic Law, there is no Constitution) and agreeing that support for Israel, rejection of anti-Semitism, and remembrance of the Holocaust, is part of Germany’s DNA.”

And Merkel injects the virus and touts the script.

In a televised New Year’s address, Merkel scolded the ‘neo-nazis’ for claiming “Germanness” solely for themselves and excluding others.

Ah, that’s the Jewish line. The devil’s in the definition.

“Germanness,” according to Jewry, has nothing to do with culture, race or religion. It’s only about where you live.

Are you a Muslim living in Berlin? Then you’ll be imbued with “Germanness.” Even with mosques on every corner.

“Americanness,” according to Jewry, has nothing to do with having European roots and 2,000 years of Christian creedal history, but where you live.

Are you a Muslim living in Baton Rouge? Then you’ll be imbued with “Americanness.”

BUT WHAT’S GOOD for the geese is bad for the Jews.

Jews see themselves as JEWS FIRST, and then perchance “merkans” or “chermans.”

(Notice in the title, “Central Council of Jews in Germany,” how they don’t call themselves “Germans” but identify themselves as a nation within a nation.)

Let the fragmented masses take on a national definition, it’s really meaningless. For NO national unity exists when composed of competing minorities.

Only the Jews rise to the top in a splintered society.

And Merkel forces the Jew-ruled Germans to swallow it.

For More See: The Jewish Occupation Of Germany Click Here