Rush To Judgment On Michael Brown 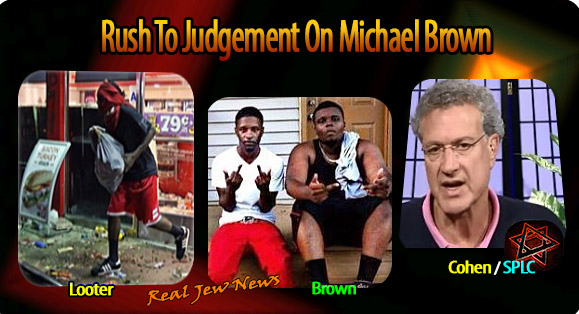 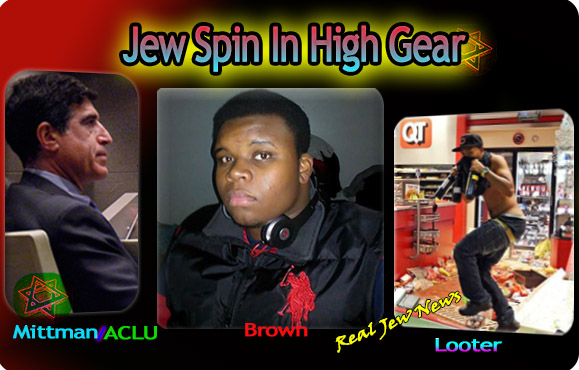 
And the cop who allegedly shot Michael Brown is pronounced ‘guilty’ by the Jew-owned press before any investigation or ballistics report has ensued.

“How many more innocents must die?” is the headline of the Jew-run Southern Poverty Center’s piece on Brown, as if through a crystal ball, the Jews at the SPLC are certain that Michael Brown is “innocent.”

Apparently, Richard Cohen, who penned the piece, decided, without any evidence, that the “guilty” cop was a perpetrator of racial profiling that led to him killing Michael Brown.

It’s the same old story put out by the Jews who own and run the media in Jewmerica: The black man is the victim of ‘white racism.’

And now with a Video showing Michael Brown committing strong-arm robbery of cigars at a convenience store while roughing-up the diminutive Central Asian male clerk, the Jew-owned press is calling this incriminating evidence a “smear campaign” against Michael Brown.

Johnson’s lawyer (Johnson was Michael Brown’s partner in crime) confirmed that Brown and Johnson had indeed stolen cigars from the store.

But let’s not confuse the Jew-owned press with the facts. A sober preliminary analysis of the alleged shooting must be our top priority. 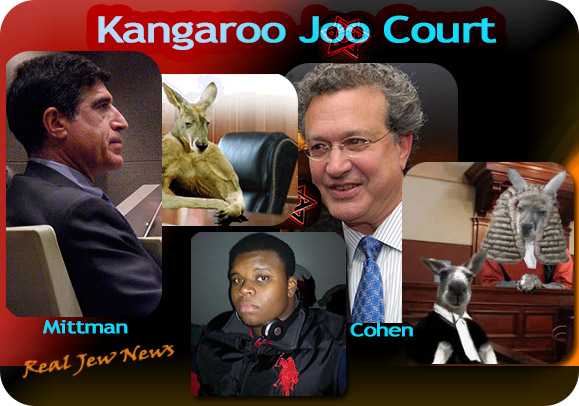 THE SHOOTING IS STILL under investigation by St Louis County, the FBI, and the US Department of Justice…(Holder investigating ‘civil rights violations.’)

County prosecutors will take as much time as necessary to review the facts surrounding the shooting death of Brown before presenting the case to a Grand Jury.

So any verdict proclaiming Michael Brown’s “innocence” is premature and pure presumption.

But Jews like Cohen hold their own kangaroo courts and immediately go to press.

And with the investigation still in its beginning stages, the Jew-run ACLU has plunked its Jewish paws into the pie with Jeffrey Mittman having the gall to file suit against St Louis County for records related to Michael Brown’s death.

Hey Mittman, you’re not getting any investigative reports UNTIL the investigation is over.

Although a predominantly “white” force, the department is a long way from becoming “militarized.” And with limited resources operating in an impoverished community, the Ferguson PD was pressed to call in assistance to address the escalating crowd conditions.

For when the rioting began—complete with agitators aiming guns at officers; protesters tossing Molotov cocktails at police; rioters burning buildings and looting stores—the Ferguson PD called in the St Louis County PD and Swat Teams of St Charles County, using their militarized equipment to address and contain the violence.

And yes, the mayor of Ferguson, of whom the majority of Ferguson blacks voted for, defended the police reaction to the violent protests.

The mayor also said that the town’s black leaders “don’t want Sharpton” to come to Ferguson. 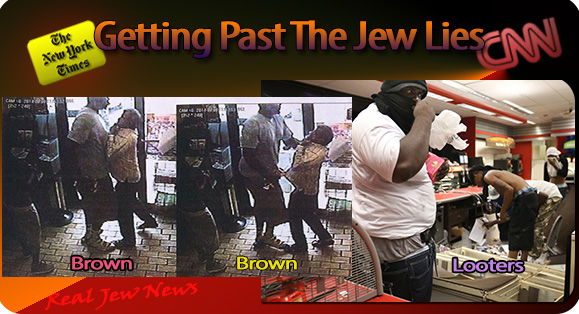 FERGUSON HAS a high property and violent crime rate — about 50% higher than the average national crime rate. Blacks are arrested in Ferguson 4 times as much as whites.

As regards the shooting, Johnson’s (Brown’s accomplice) version (pushed by the Jew-owned media) runs as follows:

After the officer (now identified as Darren Wilson) told Brown and his friend Dorian Johnson to get out of the street (they were walking down the middle of the street) then Wilson reached up through the window and grabbed Brown around the neck, who was ‘just minding his own business.’

Right. Cop sitting in a cruiser and just out of the blue, reaches through the window, grabs 6′4,” 300 lb Brown around the neck and shoots him. Sure thing.

But the Ferguson police department has a more credible version:

After getting out of his cruiser and telling the two men to get out of the middle of the street, Brown—out of an apparent guilty mind for the strong arm robbery he’d just committed—got mad, turned on the cop, pushed him into the back seat of the car, then entered inside and tried to grab his gun.

Officer Wilson “was hit” by Brown and the “side of his face was swollen.” View Entire Story Here & Here.

If in fact Johnson went for the officer’s gun and was fired in the struggle inside the cruiser, then forensic ballistics and the autopsy will show gunpowder residue & possibly a burn on both Brown and Wilson. The ballistics report will also show the bullet angle.

A rush to judgment forgoes awaiting the ballistics report and autopsy as well as the verdict by the St Louis County Grand Jury.

But those who don’t swallow Jewish disinfo will withhold final judgment until all the investigative reports come in.