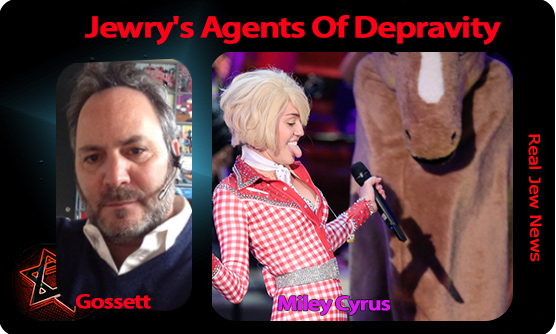 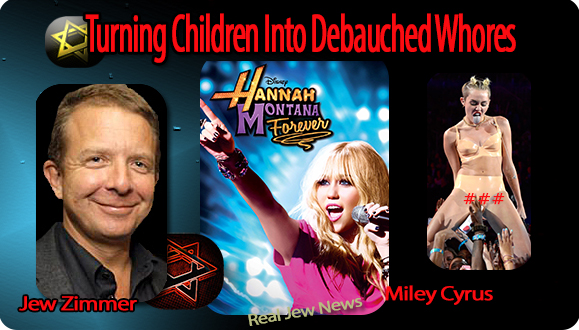 THE TRANSFORMATION of child star “Hannah Montana” to today’s “Miley Cyrus” is yet another work of Jewry’s agents of depravity.


This is ‘entertainment’ after all, and the Jews who run Hollywood are training young Gentile children to perform acts of debauchery that bring in big bucks for them.

We need look no further than the agents who represent these young victims—(soon to be jaded, wasted, and spent)—and their talent agencies which guide them to stardom.

No surprise that these agencies are mostly Jew-owned and managed.

Jeremy Zimmer, co-founder of United Talent Agency, has an entertainment pedigree that would be considered uber kosher. He’s a natural born boss as he explains in a feature interview with the New York Times.

Zimmer is the grandson of Hollywood’s Isadore Schary who ran MGM in the ’50s. Not only was Schary a Hollywood mogul he was also chairman of the Anti-Defamation League.

Mitchell Gossett is another Jewish mover and shaker in Hollywood’s agency business with deep ties to Zimmer and other top names in the Jewish-dominated talent field.

Touted as one of Hollywood’s “most respected agents,” Gossett has served the industry well in turning young goyim into whole burnt sacrifices on Jewry’s altar of perversion.

Listen here as the perversion-peddler Gossett says the first thing he noticed about Miley Cyrus was her extraordinary singing ability. “Keep it clean until you’re eighteen,” Gossett advised, and after that the “message will change.”

With Gossett’s boast that Miley captured four areas at Disney: TV, Film, Promos, and Recording,” his fellow Jews who run Disney soon molded their prey into a Babylonian queen of degeneracy which they could use to destroy all that is good and natural. 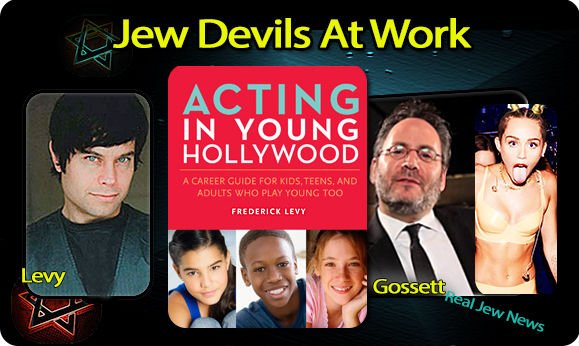 “MILEY HAS THE MACHINE behind her extraordinary rise,” says Gossett.

With Big Jewry’s “machine” backing you, it’s possible for goyim girls to sell their souls to Hollywood Jew pimps and become iconic images of Babylonian Twhores.

In his book, “Acting In Young Hollywood,” Frederick Levy advises his victims, “First build an acting career and once people like you they’ll buy your albums, your clothes, and almost anything else you want to sell.”

Yes indeed Levy. Your synagogue buddies sink their hooks into their prey when they’re young like Hannah Montana. They even get their mommies to buy into ‘porning’ their children as well. 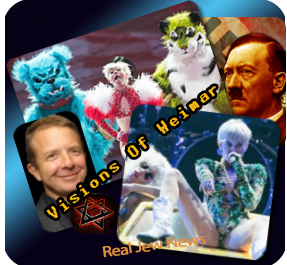 In what direction will perversion-peddling Jews take us next in their ever-expanding efforts to usher in increasingly foul and degenerate forms of entertainment?

Will it be (beware, Jew-promoted depravity): bestiality or (beware, Jew degeneracy): incest once their non-stop homosexual push is taken as the “new normal?”

Will a nation survive if it accepts these deviant forms of entertainment?

Unless we finalize a solution to the Jewish problem in America then this Jew-infested country will be tossed on the garbage dump of history.