A CHRISTmas Hating Jew Is Foiled!

A CHRISTmas Hating Jew Is Foiled! 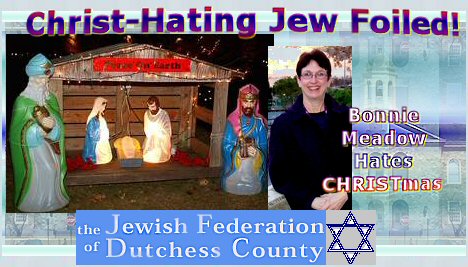 A CHRISTmas-HATING JEW IS FOILED!

After threatening the town that a Nativity Scene on the lawn of the Hyde Park Town Hall “violated federal law,” the Jew Bonnie Meadow had to eat some kosher crow. For the public outcry following Meadow’s request was more than she expected. Thus Bonnie Meadow deemed it would probably be “politically correct” to write a public apology to the Town Hall:

— “I never dreamt that my request to remove the Nativity Scene would upset so many people so much. It was never my intent to hurt anyone or to spoil their holidays. In view of the public outcry, I hereby rescind my request.” —

CHRIST HATING JEWS are liars. Just look at what Meadow said with her tail hanging between her legs: “It was never my intent to hurt anyone or to spoil their holidays.”

Now that’s a lie if I ever saw one! For it was indeed her intent and all the Christ-hating Jews’ intent to destroy Christianity in whatever form it is publicly expressed throughout America.

Why do I say that the Christ-hating agenda of the Jews “has now come to an end?” Because the Jews simply do not know when to stop their obnoxious, obsessive ways.

Have we not all at some point in our lives experienced the pushy Jew? And how did we react? But now all of America is experiencing the pushy Jew! And how is America going to react? I think we all know the answer…