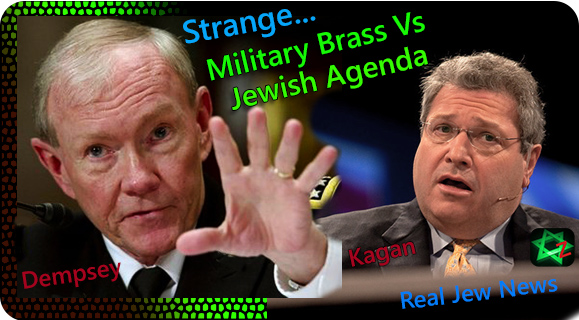 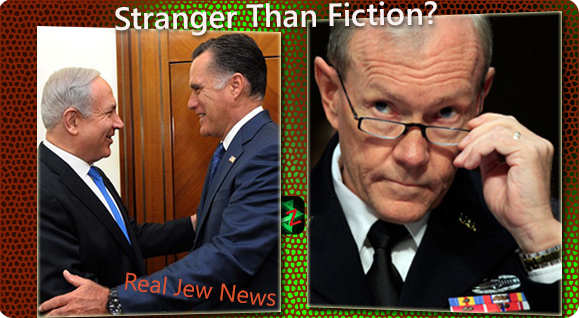 TRUTH IS STRANGER than fiction, indeed, is the case of US Military Brass now opposing Jewry’s agenda to set ablaze the entire Middle East with interminable wars.


But easily stated ‘truth’ can just as easily turn to fiction…with a very unhappy ending.

In three very recent back-to-back statements, General Martin Dempsey, the Chairman of the Joint Chiefs of Staff, has defied American Jewry’s clamour for bloodshed in the Middle East where only the Goys die young:

• August 31, 2012 - Dempsey Comes Out Against An Enlarged Joint Military Exercise With Israel.

The anti-Zionist position of the upper echelons of the US military gets even stranger. And the timing appears to be very well planned. 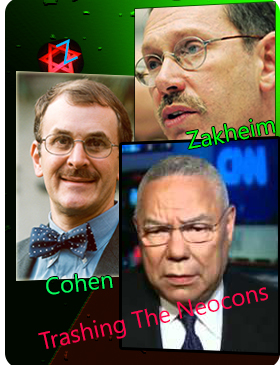 In an interview with CNN on August 26, 2012, former Chairman of the Joint Chiefs of Staff, Colin Powell, defied Jewry’s push to fully arm the ‘rebels’ in Syria by saying: “We’re not entirely sure who the rebels are, what they are, and what they represent.”

Powell, like Dempsey, is also against a no-fly zone in Syria, mocking the Jewish warmongers with his retort: “You don’t just grab slogans and run with it.”

Potent statements coming from the lips of military brass like Powell’s and Dempsey’s zinger: “I don’t want to be complicit in an Israeli attack on Iran” is sure to upset the Jewish neocons—like Cohen, Kagan, and Zakheim in Romney’s war cabinet—which Powell trashed in his CNN interview.

The Israelis are already taking pot shots at Dempsey by saying that his statement “undermines Israel’s push for war on Iran” and that his use of the term “complicit” has “criminal connotations.”

Why of course! Israel is a “criminal” state from start to finish. Just ask countless Palestinians whose land has been stolen and its people murdered.

BUT WHETHER OR NOT it will ignite the ire of Senator Joseph Lieberman, the leader of the pack of blood-thirsty Jews—who recently (along with homosexual arm-chair general, Lindsey Graham, and the senile Jewish-shill, John McCain), demanded a Syrian no-fly zone “like in Libya”—it will surely boil the blood of Amerika’s wanna be commander in chief, Bibi Netanyahu.

In February 2012, in response to General Dempsey styling an Israeli-led attack on Iran as “foolish,” Netanyahu lashed back by calling Dempsey, “a servant of Iran.” 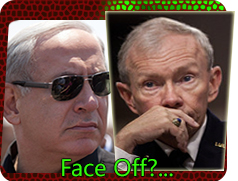 Now, Netanyahu can get away with these kinds of attacks on people like Obama—Jewry’s Shwartza in the White House—or on the Jewish-shills on Capitol Hill, if any of them should get out of line.

But to target US military brass with verbal assaults—especially coming from Jews whose chemistry sets off an automatic aversion in the Gentile blood of US military commanders—is to tread on volatile ground.

To put it bluntly, (for I grew up as a Jew), tough Gentile Generals don’t like taking orders from Jews.

But, let’s wait and see.

Perhaps the military, evil as it is, and in spite of its war crimes in Iraq and Afghanistan, will finally say to Lieberman and the rest of the bloodthirsty Jews: “Shove it up your Zionist rear ends!”

And: Why Is The World Enslaved To A Jewish State? Click Here