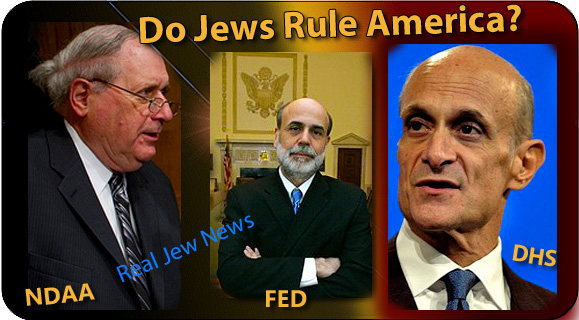 FOR THE FIRST TIME in modern history, a people whose identity is bound up with its race and religion have full control of every aspect of a nation’s infrastructure.


That people whose race and religion are intrinsic to their individuation proudly call themselves “JEWS,” yet they resent others calling them such. And that nation brought under JEWISH SUBJUGATION is America.

There are many “famous” Internet publicists who fancy themselves as “investigative reporters” yet are frightened by those in power to use the “JEW” word.

Alex Jones, for instance, depends on Jewish advertisers and Jewish radio moguls for his livelihood. Many are of the opinion that Alex Jones (like most media personalities), is OWNED by the Jews.

But this reporter who grew up as a Jew does not fear those who crucified Jesus Christ and CONTINUE to crucify Him and wreak havoc upon all that is good and ethical in our former Christian society.

THE BANKSTERS ARE JEWS

A JEW BY THE NAME of Mayer Amschel Rothschild said at the outset of the 19th Century, “Give me control of a nation’s money and I care not who makes its laws.”

This boast finds its fulfillment with the Federal Reserve Bank which in spite of what most Americans perceive through Jewish brainwashing is NOT “Federal” NOR has any “Reserves.”

The Fed is a private consortium of banks whose principal holders are the Jewish heads of the Rothschild Dynasty, Goldman Sachs, and JP Morgan Chase. 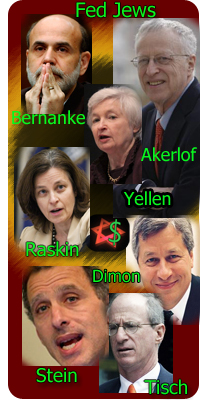 The Chairman of the Fed’s Board of Governors is the Jew, Ben Shalom Bernanke, who is a protege of his Jewish master, Alan Greenspan, who STILL wields considerable influence at America’s Central Bank.

Vice Chairman of the Fed is Janet Yellen whose JEWISH husband, George Akerlof, is a consultant to the Federal Reserve as well as to Barclays for which he invented “paper” Gold and algorithms for rigging currency markets.

The third ranking member of the Board of Governors of the Fed is the JEW, Sarah Bloom Raskin, hailed by Jewish bankers in their celebration over her appointment in 2010.

Soon to join his co-religionists at the Fed, is the JEW, Jeremy Stein, an “economist” of the former Presbyterian Seminary, (now a Yeshiva), Harvard University, and “treasurer” of the Obama administration. Obama was given Stein’s name this week by his Jewish masters to ”nominate” to the Board of Governors.

Holding powerful seats on the Board of Directors of the New York Fed, (where money is disbursed to those WHOM THE JEWS CHOOSE), are the JEWS, Jamie Dimon, CEO of JP Morgan Chase (Dimon is NOT a “Greek.” Dimon’s parentage were heirs of Smyrna’s Jewish banking moguls) and James Tisch, the owner of Loews Department Stores who also serves on the powerful Council on Foreign Relations as well as on tons of JEWISH-DICTATORSHIPS. 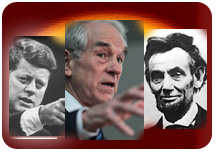 The privately-owned Jewish Federal Reserve Bank prints and loans money AT INTEREST to the US government. Only Ron Paul contends that the US government HAS THE RIGHT to print its own money SANS INTEREST.

Thus, with his 2012 campaign platform to END THE FED and CUT OFF funding to Israel, Ron Paul stands a good chance of being assassinated.

The Jewish gouging continues, enlarging America’s DEBT to the Jewish bankers. Sadly, the US Military is in the thrall of the Jews, since its funding for its wars and salaries is dependent on the printing presses of the Jewish-owned Federal Reserve.

JUSTICE BY THE THROAT

BEGINNING WITH THE SUPREME COURT, three Jews, Ruth Bader Ginsburg, Stephen Breyer, and the alleged lesbian, Elena Kagan, serve on the highest bench of the country.

Pat Buchanan was the first to point out that Jewry which “makes up less than 2%” of the population have a disproportionate “33% representation” on the Supreme Court.

Of course, the powerful Jewish Lobby, the Anti Defamation League (ADL), which drafts domestic legislation for its Jewish-bought politicians on Capitol Hill, smeared the honorable Pat Buchanan as an “ANTI SEMITE” (aren’t we sick and tired of these wretched Jews by now?), for his criticism of Jewish overload at the Supreme Court.

The Jewish ADL with its training of local police forces, has infiltrated America’s law enforcement arm of America’s justice infrastructure. (The “GOYS” at your local police are in JEWRY’s hands.)

And recent appointments to US District Courts have been the Talmudic (anti-Christ) JEW, Karen Chaya Friedman, whose “training” included a day at the National Holocaust Museum, and Nina Gershon, who recently ruled in behalf of her fellow Jew, George Soros, restoring ALL federal funding of the billionaire’s ACORN lobby group. (Jews take care of their own.)

CBS is owned by Murray Rothstein, who passes himself off as a blue-blooded Gentile with the name, Sumner Redstone.

The owner of Comcast is the Jew, Brian Roberts, whose NBC Universal subsidiary finds Roberts as Chairman of the Board of Directors.

ABC is owned by the Walt Disney Company, with the Jew, (attested by the LA Times), Robert Iger, installed as CEO in 2005 whose term was recently extended to 2016.

Iger recently joined his co-religionist, Arthur D. Levinson, Apple’s new Chairman, (powerful Jews ALREADY HAD CONTROL of Apple before the Gentile Steve Jobs’ decease), as a leading member of Apple’s Board of Directors. 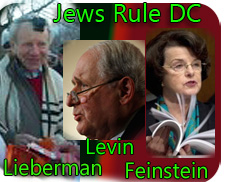 JEWS CHAIR THE HIGHEST SEATS on Capitol Hill. Heading the Military/Security apparatus are Senator Joseph Lieberman, a Talmudic Jew, who chairs Homeland Security, while his co-religionist, Senator Carl Levin, heads the Senate Armed Services Committee. Levin was the SOLE-SPONSOR of the National Defense Authorization Act, of which Section 1031 authorizes the military to imprison US citizens for life without trial. 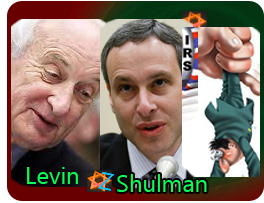 Carl Levin’s brother, Sander Levin, as ranking member, chairs the House Ways and Means Committee which oversees taxation. Congressman Levin works very closely with his FELLOW JEW, Douglas Shulman, the current head of the IRS, in their Jewish enslavement of the American worker.

Zionist Jew, Senator Chuckie Schumer, chairs the Judiciary’s Subcommittee on Immigration and Border Security. And we wonder why White Christian America is disappearing?

DICTATING FOREIGN POLICY are the powerful Jewish Lobbies, AIPAC, the Council on Foreign Relations, (led by the JEWS, Richard Haas and Robert Rubin), the AEI, and the Jewish neocon ‘think tank,’ Project for the New American Century.

The PNAC has reincarnated itself as the Foreign Policy Initiative, whose head, William Kristol, dictates DC policy from his panel position on Fox News Sunday every week.

Time does not allow for the listing of the myriad of Jews who have taken over academia, publishing, and the education of our youth, of which finds the Jew, Randi Weingarten, as head of the American Federation of Teachers.

Suffice it is to say that having grown up as a Jew, America is now in the hands of those who are dedicated to the destruction of Christian society.

THE DANGER inherent in Jewish rule is that Jews (I grew up in Jewry) are the MOST NEUROTIC PEOPLE walking the face of the earth. The MAJORITY OF JEWS are ON PROZAC.

And: The Menace Of The Jewish Run State Click Here

And: Will The Jews Let Ron Paul Win? Click Here