What Judaism Is Really All About

Judaism Articles, Why I Left Judaism

WHAT JUDAISM IS REALLY ALL ABOUT
By Brother Nathanael Kapner, Copyright 2008-2011

I GREW UP IN JUDAISM. I attended Sabbath school from childhood until my young adult years. Now that I am an Orthodox Christian I can attest:

Judaism Is Not A “Religion” But A “Club” Promoting Racial Self-Worship.

It is paramount to know that Judaism includes all Jews whether they are religious or not. Gentiles who convert to Judaism are considered 2nd class citizens.

Most Jews give this answer after I tell them that Jesus Christ is the Jewish Messiah: “I was born a Jew & I will die a Jew.” What they really mean is: “I will never become a Gentile.”

For as far as Jews are concerned (wrongly) Christianity is for the Gentiles. And Jews do not want to belong to that club. 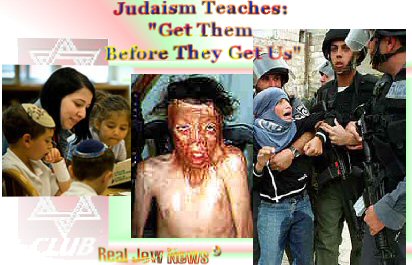 1) JUDAISM TEACHES that Jews are a victimized people. Thus Jews are taught: “We must get them before they get us.” This is the driving force behind The War on Terror, The War in Iraq, & the impending War on Iran.

2) JUDAISM TEACHES that Jews & Gentiles cannot coexist. Jews are taught: “We must control them before they control us.” This is the driving force behind the Jewish Lobby & the Jewish control of the mainstream media.

3) JUDAISM TEACHES that Jews are superior to the Gentiles. Jews are taught: “We can step on the Gentiles.” This is the driving force behind millions of Gentiles being stepped on by Jews. You perhaps?

Here Is An Excerpt From A Recent Article Of The Jewish Forward Entitled:

When the requirements of existence conflicts with morals, realpolitik should be given priority leaving limited room for ethical considerations.

And so we see the essence of Judaism: “Jewish physical existence takes precedence over ethical considerations.” Now what are we going to do about a Judaism whose adherents want to get us, control us, & step on us?


And: “Kill Civilians? The Talmud Tells Me So” Click Here