How To Spot A Nasty JewTuber 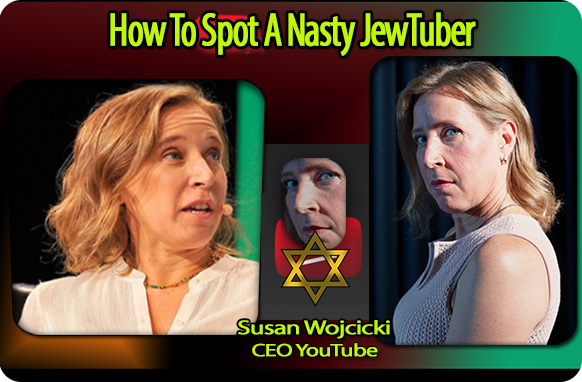 WHETHER IT’S A CROOKED MOUTH, a foul profile, insolent eyes, a hooked nose, or scowling jowls, spotting a nasty JewTuber is easier than slicing a matzah ball.

She’s a Jew who rose to Google fame on the kosher agency of her father, Stanley Wojcicki, a professor of physics at Stanford University, renown for its extensive research grants from the Pentagon and CIA (READ: Mossad.)

Stanley Wojcicki was sponsored by the US government agency, the National Science Foundation, whose close ties to the CIA/Mossad are apparent.

Bringing Wojcicki from Poland in 1978, and apparently placing him as a professor of physics at the Pentagon-oriented Stanford University—where Sergei Brin and Larry Page later became students—Wojcicki was doubtless a willing shill for deep state work.

Propped up on her father’s coattails and her links to Brin and Page, Wojcicki rose to celebrity status as ‘CEO’ of YouTube which is a division of Google owned by the Israel Intelligence Agency, The Mossad.

Susan’s Wojcicki’s sister, Ann, later married Sergei Brin, and as the saying “All in the family” goes, it applies not only to next of kin but to the entire kike cabal. 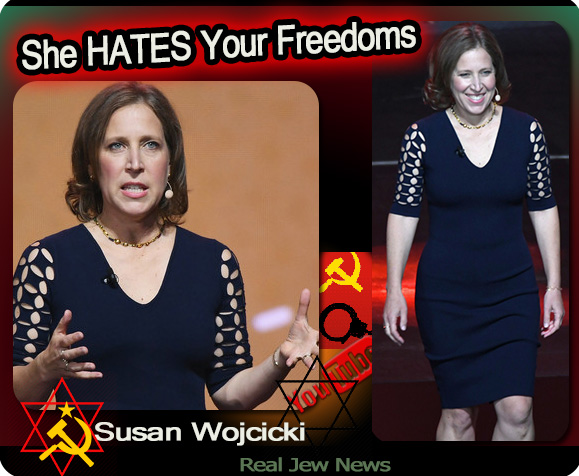 WOJCICKI, TWO-FACED LYING JEW that she is, apologized to a group of LGBTQs in June for not being strict enough in taking down “hate” videos that call into question sexual deviancy.

But does Wojcicki care about the numerous YouTube videos that attack Christians, whites, conservatives, and that blaspheme the Lord Jesus Christ? Not a chance.

But for queers, fags, lesbians, and trannies, Wojcicki (like all Jews) makes it her business to give perverts special treatment and tender loving care.

But speeches to Christians?

Like all Jews, Wojcicki wouldn’t dare be seen in friendly company with wholesome, decent, God-loving Christians.

Yet she’s all Yiddishee joy when kibitzing and scheming with her fellow Yids. 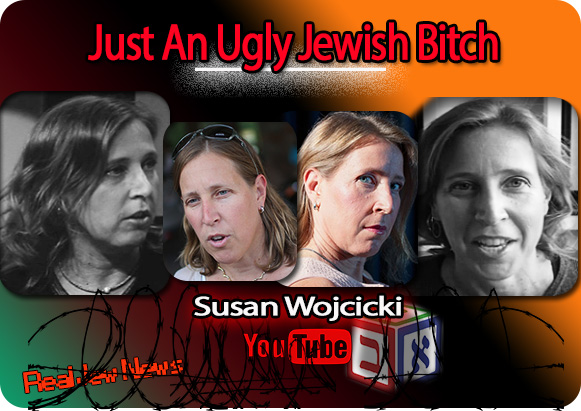 IN RECENT DAYS, Wojcicki proffered “a commitment to openness,” adding that “even if it meant leaving up content that was controversial, or offensive, or outside the mainstream, it does more good than harm.”

Two days later, Wojcicki targeted and banned a host of conservatives on the Hit List of that free-speech-hating Jew group, the Anti-Defamation League, a ‘trusted flagger’ for JewTube.

And the Jewish Community at large brags about Wojcicki censoring all videos that reveal how Jews played a pernicious role in the tragic events of 9/11.

That said, her visage is a dead giveaway of her unsavory character.

With Susan Wojcicki’s arrogant eyes, protruding nose, sinking jowls, scowling lips, and crooked mouth, one gets the impression of a nasty Jewish bitch.

Perhaps this is why she sh#ts all over the US Constitution which guarantees American citizens the right of free speech.

One always gets the face one deserves.

And for Yids like Wojcicki, the face of censorship is just an ugly Jewish bitch away.

Autopsy Of An Epsteined America Here

Buy Your Gun Yet? Here

Why I Left Judaism Here

The Damnation Of Confederate Memory Here