Putin’s A Statesman, Obama’s An Ass 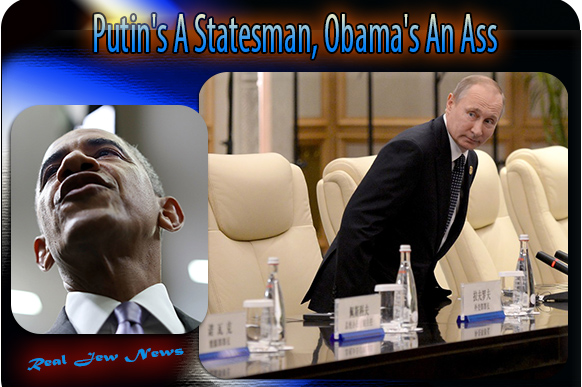 Putin, in response to Obama expelling 35 Russian diplomats and their families from DC, refused to dismiss the US diplomats from Moscow.

Instead, he invited them and their children to join the Kremlin’s Christmas Season festivities. That’s the mark of a statesman.

Obama, in blaming Putin for unproved “hacking,” acted as only a low-born (bastard son) snake is wont to do: scare your enemies with hisses, slithers and squirms.

And Putin isn’t scared of a queer whose legacy is sodomizing America by championing the debauched acts of homosexuality, lesbianism, and transgenderism…Obama’s sex-gods.

Barky is playing Cold War Redux while Vlad is way beyond that. He’s on the beach enjoying the sun until Trump gets in…then it’s start from square one.

“We will not resort to irresponsible ‘kitchen diplomacy,’ remarked Russia’s president, deflecting Obama’s peevish attempt to smack ‘Vlad the Bad’ with his handbag.

And Vlad wasn’t about to escalate the ‘kitchen diplomacy’—(like married couples would do in a family fight, even to the point of lobbing dishes at each other)—into the divorce court, saying he’ll wait until the Lame Duck Prez no longer quacks and flutters about. 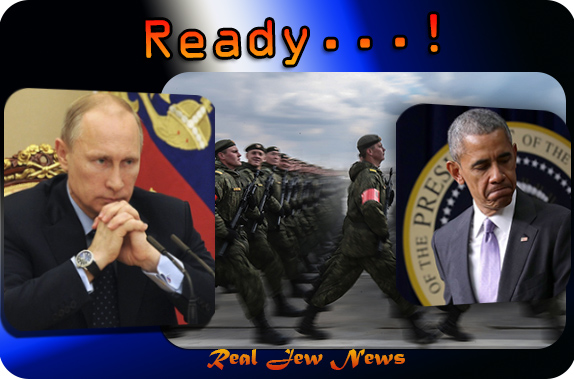 OBAMA’S A SPITEFUL THING and doubtless regrets he couldn’t pull off a false flag against Russia in Syria.

But with the Nato buildup on Russia’s borders, Obama has time to try another false flag closer to Putin’s home and further from Trump’s pledge for reconciliation with Russia.

The cold war Jewish neocons who fear Putin and losing Jewmerica’s unipolar global hegemony are itching for it.

But Russia is fully prepared for a military showdown…and it won’t be a game of chicken to discover who’s the bravest of them all but who will protect national interests.

Showdowns prosecuted far from home will place the Goys who fight for Jewish causes in harm’s way.

Young Gentile kids sent off to fight wars for the Jews need to stop reading the Pentagon’s handbook but rather pore over Su Tzu’s Art of War: “There is no instance of a country having benefited from prolonged warfare far from home.”

NO NATIONAL INTERESTS are at stake for America, only to keep the Jewish think tanks flush with armament company’s cash, and the war economy on track.

And besides, Putin knows that Jewmerica’s influence is on the wane.

The players are not the G-7s and G-8s (club members of the Kosher Belt) but the G-20s, the SCOs, and BRICS, where the economic climate is warming up to a prosperous era.

If Trump wants to join the new in-crowd, he must keep the Jewish warmongers at bay.

And: The Difference Between Obama And Putin Click Here