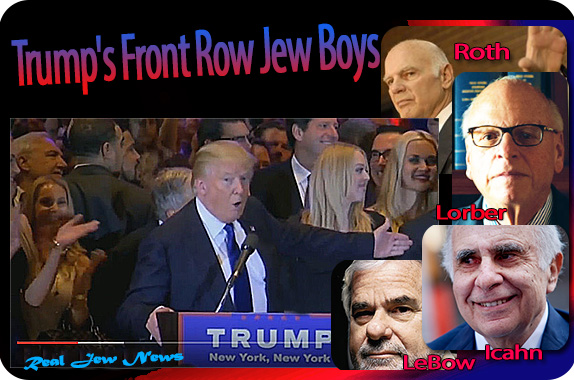 “OUR JOBS ARE BEING SUCKED OUT of this country,” Trump warned in his victory speech celebrating his win in the New York primary last night.


Not only his family, but Trump’s Jewish business buddies—big players in New York City finance and real estate—stood with him in the front row.

Carl Icahn, Howard Lorber, Ben LeBow, and Steve Roth were cited by name as Trump pointed them out with heaping praises to his supporters at the Trump Tower gathering.

“That’s my boy!” proclaimed Trump of Steve Roth, a high-rolling real estate mogul known for his “philanthropy” to, (why, of course), Jewish institutions such as the Jewish Theological Seminary of America, the Roth Center For Jewish Life at Dartmouth College, and the NYU Medical School.

Special honor was given to Trump’s friend, (and bankruptcy rescuer), Carl Icahn, who gets honorable mention as a “savvy trader” at every Trump rally where Donald promises that “Carl will bring our jobs back” faster than a speeding bullet, (except for the ones Carl invests in, in China and Mexico.) 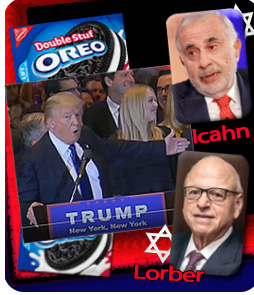 Then we have Ben LeBow in Trump’s front row, whose sleazy eyes match his “Red Mafiya” luxury hotel deal in Kiev, Ukraine.

And not to be ignored, Trump mentions Manhattan real estate mogul, Howard Lorber, as part of his “evolving team” who will join forces with his fellow “front row Jews” to negotiate trade deals that will make America great again.

Lorber brags about his mentor, Ben LeBow, who doubles as his business partner, and trumpets his agenda for diversity:

“I will fight to maintain diversity in New York City,” vows Lorber.

THAT MAY BE well and good.

But for the White Supreme “Trumpeteers” who think Donald is the “great white hope”…these kind of statements by his front row boys don’t quite live up to their hope.

All told, Trump is on his way to the Republican nomination and sucking jobs back from China and Mexico is his top priority.

With Jews on his team, what kind of sucking can we expect?

If we can suck Oreo cookies back then America has a chance to taste really great again!

Especially the ones marked “kosher.”

And: What If Our Jobs Don’t Come Back? Click Here

And: Will Trump Be Denied The Nomination? Click Here