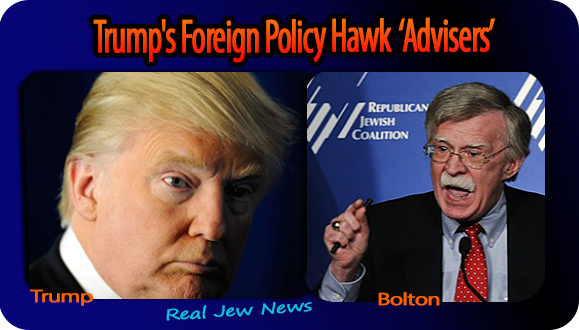 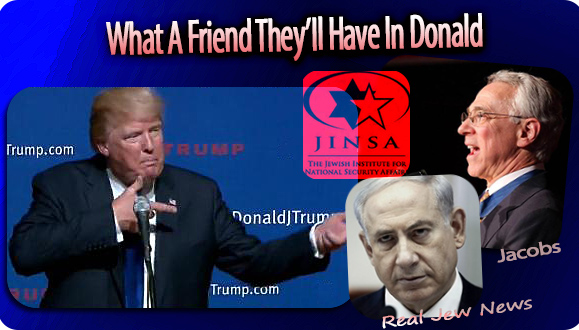 “BOLTON’S A TOUGH COOKIE,” said Trump on Meet The Press last Sunday when asked who are his “go to” people for military advice.


Most would agree with Trump that John Bolton is a “tough cookie.” Many would even go further and call him a bomb-happy hawk.

Raised in neocon ‘bomb any country that opposes Israel,’ Bolton is most happy planning war and misery with his favorite kind of people: Jews.

Indeed, Bolton is an adviser to The Jewish Institute for National Security Affairs (JINSA), a Jewish Lobby instrumental in sending Gentile youth to die for Israel in the Iraqi War.

Trump next picked an “Israel-First” Jew: “Colonel Jack Jacobs is a good guy. I see him on occasion,” said Trump. 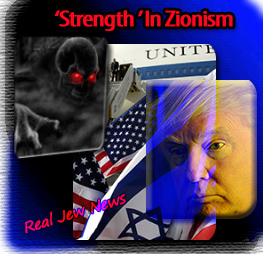 JINSA sees their ‘go-to’ Jew on lots more occasions, since Jacobs serves on its Board with advice on how to “secure” America by making Israel “stronger.”

And the Jews got a friend in Donald who told a whipped-up audience, “I will rebuild our military. It will be so powerful and so great, nobody’s going to mess with us.”

With Trump claiming he’s the only one that’s a true supporter of Israel, nobody’s going to mess with the 3-billion-per-year tagged for Israel.

IN FACT, Trump will increase it.

And nobody becomes a real estate mogul in Manhattan without mingling in Jewish company.

Trump’s done just that with lots of IOUs that will be called in by Jews if Donald makes it to the White House.

How ’bout this one from Trump’s Jewish buddy, Carl Icahn, who bailed him out of a major bankruptcy in Atlantic City:

“Hey Donald, Bibi’s coming to DC tomorrow looking for a markdown on those bunker buster bombs slated for Israel. Can you cut the price?”

“Of course, Carl. One hand washes another!”

And DC will be awash with Jews…if Trump becomes Jewmerica’s next prez.

For More See: When Trump Makes A Deal Click Here