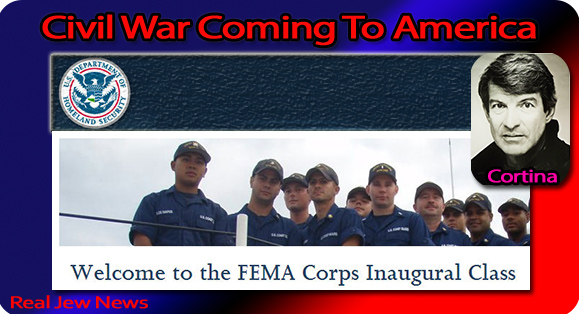 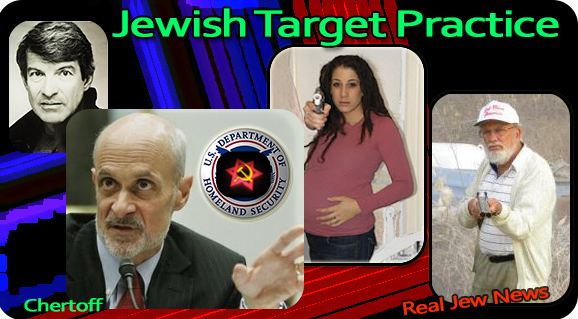 Br Nathanael: Will there will be another civil war in America?

Joe Cortina: I’m not sure if Americans have the stomach for it, but Homeland Security, run by Jews, certainly does.

Yet at the same time, all the makings of a civil war are evident.

Our people are divided, our economy is in a death spiral, and our Constitution is being trashed daily by the very people who should be defending it.

Joe Cortina: You bet they are. And feasibly preparing a false-flag to set one off.

Homeland Security is run by Jewish traitors, Lieberman and Chertoff. And, no, Lieberman has not really ‘retired.’ Jews don’t retire. He still pulls the strings.

You see, Homeland Security, under Lieberman’s and Chertoff’s orders, has bought enough bullets to kill each American 5 times.

And it recently purchased practice targets of pregnant women and elderly citizens who pose a ‘threat’ to their Jewish regime.

Couple this with a full-blown “Fema Corps” which had its first graduating class last September as a kind of Communist Red Guard to put down any resistance to their Jew World Order.

Either we will continue being embroiled in serial wars for the Jews and mired to our ears in a giant unflushed toilet of moral decay in the new Sodom and Gomorrah of the ultra-rich Jewish haves and the very poor Gentile have-nots.

Or, we will come to the collective conclusion that we must fight right here, right now, to get our nation back. If we don’t, our children will curse us in our graves for selling their heritage to the Jews. 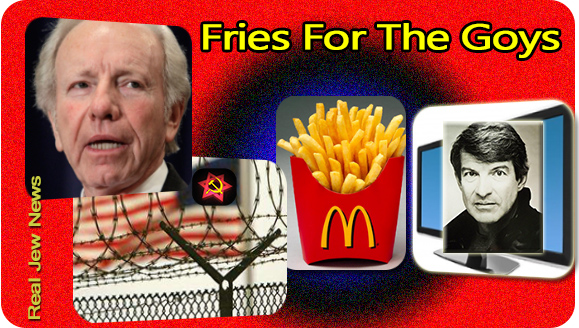 Br Nathanael: What if various militias begin engaging in some form of civil war?


Joe Cortina: It would be a disaster for good and decent citizens. Drones flying above and Jew-paid cops below will quash it in a minute followed by martial law. An uprising has to be TOTAL involving ALL Americans.

But we have become a weak submissive people who exchange freedom for security. Yet in that process, we lose both and deserve neither.

As long as Joe six-pack has his cold Bud and his large screen TV he will endure any kind of abuse.

Whether it be gross immorality imposed 24-7 upon his children, $10 dollar-per-gallon gas, death spiral inflation, deteriorating medical care, more endless wars for the Jews, the final destruction of true Christian belief by Jewry, or total invasion of his privacy by Big Brother Jew, he will remain indifferent until he PERSONALLY suffers the horrors he has imposed on others.

Then, of course, as you once said, Lieberman and Chertoff have stocked the FEMA camps with wide screen TV’s and plenty of ‘fries’ for the Goyim.

Br Nathanael: What will it take to motivate Americans to take action against the Jewish criminals who have stolen our nation’s morality, soul, and wealth?

Joe Cortina: It’s going to take an event that affects ALL in a way that the typical dumbed-down American can no longer tolerate.

Joe Cortina: Like a new mass shooting resulting in Feinstein and her ilk passing an all-out gun law enabling Jewish-trained Storm Troopers to take our guns and start killing people in their homes.

MAYBE that will be the final straw to push Americans over the top to actively DEFEND their God-given right to arm themselves.

Or how about this. Just ONE respected military commander with an above-reproach background and a powerful following—(kind of like Patton)—who turns on the government and exposes mass corruption and treason BY NAME, and I mean Jewish names who have run our nation into the ground.

I would follow a man like that to the gates of hell. I suspect I would not be alone as millions of REAL patriot veterans would follow his lead. 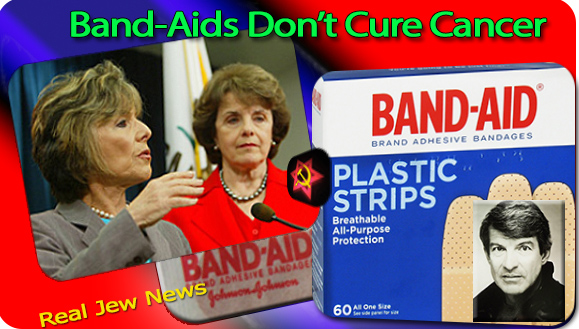 Br Nathanael: What needs to be done to restore our nation?

Joe Cortina: You DON’T cure cancer with band-aids and herbs. It MUST BE CUT OUT — every sick threatening cell must be KILLED to save the patient.

We would begin by registering AIPAC as an agent of a foreign nation.

Then nationalizing the press on a temporary basis to remove it from Jewish ownership.

Next, a new Amendment to our Bill of Rights would have to be enacted that would forbid the Second Amendment to be tampered with by domestic enemies—that is, the Jews.

Finally, closing down the Jewish-owned Federal Reserve Bank so that we can coin our own money WITHOUT INTEREST as our Constitution provides.

This would pave the way to independence from International Jewry, the most pernicious force ever to appear in the history of man. You see, America is no longer a sovereign nation, it’s run by the Jews, a global network of thieves.

Then, and only then, will there be no reason for another civil war to save our dying, Jew-occupied nation.