ALL THE KING’S JEWS were there—both from The Lobby and Capitol Hill—to deliver to their puppet president, Barack Hussein Obama, his marching orders.


The Zionist Jewish leaders, which included the Anti-Defamation League’s Abe Foxman, had originally tried to keep the meeting secret, but hastily added it to the official schedule after the news leaked out.

A 50-person Jewish delegation from the Conference of Presidents of Major Jewish Organizations slid from under their rocks to inject their demands into their fraud shill in the White House at a dinner in the State Dining Room on 1 March 2011.

The envoys (enforcers) of the Zionist agenda to constantly reaffirm America’s “unbreakable bond” with the (Rothschild) state of Israel also met with Jewish White House insiders: 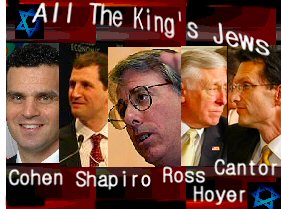 With a stacked deck of hardcore Jewish agents both inside the White House and the Zionist Halls of Capitol Hill, America is once again held captive, bound and gagged, and on bended knee by a foreign machine within its own borders.

During the ‘meeting’ (instructional session), Obama cowered to his Jewish masters, reminding them of his recent veto of the Anti-Israel UN Resolution and agreeing with the Zionist pack that Israel “must use” its military strength to create a context for peace with the Palestinians.

Speaking to the press afterwards, Rabbi Steven Wernick, CEO of the United Synagogue for Conservative Judaism, lauded Obama for “really listening” to the Jewish community as a “testament” to democracy in America. (What a joke!) View Entire Story Here & Here.

(It is wise to always keep in mind that American Jewry amounts to no more than 1.5% of the entire population of this country.)

“The President and Congressional leaders reaffirmed their deep commitment to Israel’s security.” (Reaffirmed to continue the unlimited bankrolling of Israel and to committing war, crime, and mass genocide for their master.)

“And with Admiral Mike Mullen’s recent visit to Israel, where he said that the accord between the two militaries is the best it’s ever been, demonstrates that the special relationship between the US and Israel is very strong.” View Entire Story Here, Here, Here, & Here. (’Special’…as in a rich slave whore to be raped and plundered at will.)

Summing it all up in a joint White House & Conference statement, traitor Obama affirmed his “opposition” to any effort to single out Israel for criticism, and, (of course), his commitment to “maintaining” foreign aid to Israel. View Entire Story Here & Here.

AND THERE YOU HAVE IT —yet another kangaroo court— presided over by Zionist judges and their court scrivener, Barack Hussein Obama, who, like an obedient copyist, announced their Jewish agenda to all the goyim cattle and sheep of America.

“Is IT GOOD FOR THE JEWS?” is the touchstone question of the Jewish Lobby and their constituency made up of a fly speck of the US population when formulating their demands upon their stooges and bitches in the White House and Capitol Hill.