What You Missed In Trump’s ‘Peace Plan’ 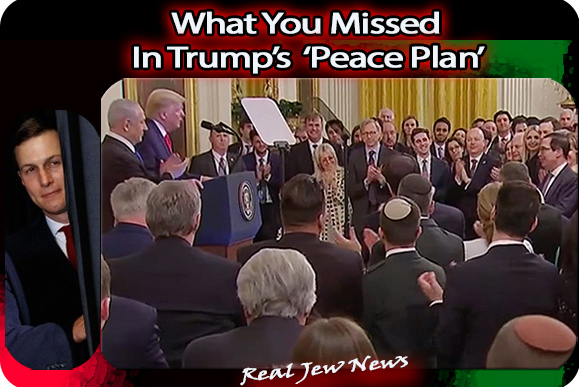 TRUMP’S ‘STEAL’ OF THE CENTURY made its debut this week and all the Jews were there to cheer it on yet not a Palestinian in sight.

But Jared Kushner was there, and so was Malcolm Hoenlein, the head of the Conference of Presidents of Major American Jewish Organizations, and that tells the story:

The Theft Of Palestinian Property Made Legit

All Israeli settlements in the Occupied West Bank will be annexed to Israel.

The Jordan Valley will be under Israeli sovereignty.

Jerusalem will be the “undivided” capital of Israel.

A Palestinian ’state’ will be truncated into 3 demilitarized cantons in the Occupied West Bank separated by Israeli settlements, and 1 in Gaza.

A Palestinian ’state’ will be created with no contiguous territory, no border with Arab states, and no control over air-space, water or vital resources.

A clump of villages beyond Jerusalem’s walls will be the Palestinian ‘capital.’

Opposition to Israeli repression will be cast as “terrorism” resulting in a “justified” assault by Israel on the Palestinian enclaves.

2) A “recognition of Israel as a Jewish state” by the Palestinians before negotiations begin.

All Palestinians in Israeli territory would thus ‘legally’ become second class citizens, and would ‘legally’ abdicate their claims to their properties stolen by Jewish colonization.

If I were a Palestinian I would tell the Jews and their Gentile shills to go to hell.

The Enemies Of Free Speech Here

Who’s War Is It Anyways? Here

The Four Curses On Judaism Here