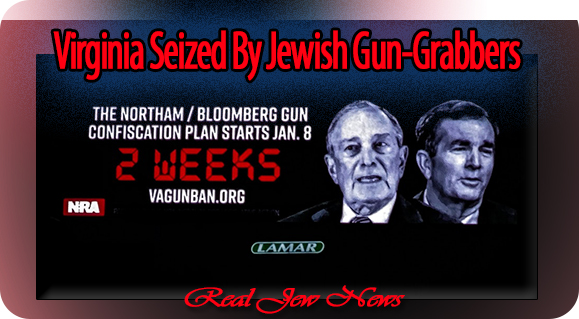 BILLBOARDS ARE NOW UP addressing the contest between ‘Bloomberg-Bought’ Virginia Legislators and Gun-Rights warriors.


By making possession of commonly-held firearms into Class 6 Felonies with five years’ imprisonment, Virginia law-makers are pressing to turn myriads of Virginians into felons.

While the newly-elected Democrat State legislators were financed by Michael Bloomberg, two other ignominious Jewish gun-grabbers especially stand out:

Among their proposed draconian gun-control laws are mandatory background checks when ‘transferring’ a firearm to family members:

No person shall sell, rent, trade, or transfer a firearm without first subjecting the transferee to a state police background check.”

ONE MIGHT ARGUE that laws forbidding the carrying of arms disarm only those not inclined to commit crimes.

But the Jews who have seized the Old Dominion hold the sage advice of that great Virginian, Thomas Jefferson, in utter contempt. 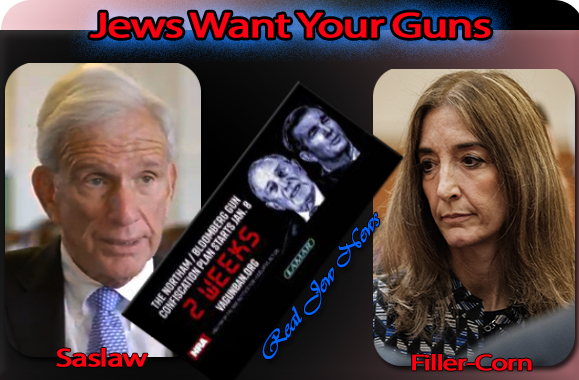 Under his law, Jewish Senator Saslaw will deprive gun owners of a grandfather clause, and thus they either surrender their arms or go to jail.

If Saslaw and his Jewish comrade in gun confiscation, Eileen Filler-Corn, create a “buy-back” program, there is no way in hell that owners will get market value for their costly firearms.

Semi-automatic rifles and pistols with telescoping stocks and thumb-hole grips.

Virginians also would be forbidden to own pistols with an unloaded weight of over 50 ounces; guns that accept magazines at any other point than the pistol grip; and firearms that have magazine capacity of over seven shells.

To be sure, Saslaw’s law provides for “periods of imprisonment” for non-compliance.

ONE MIGHT ARGUE that a country can preserve its liberties only if its rulers are on notice that the people preserve the spirit of resistance. Let them take up arms!

It would then behoove the Jews who have seized the Old Dominion with Bloomberg’s money to heed Thomas Jefferson’s sound advice.

But haters of the framers will destroy America until there’s nothing virtuous left.

Buy Your Gun Yet? Here!