Hagel Sucks Up To ADL Jews 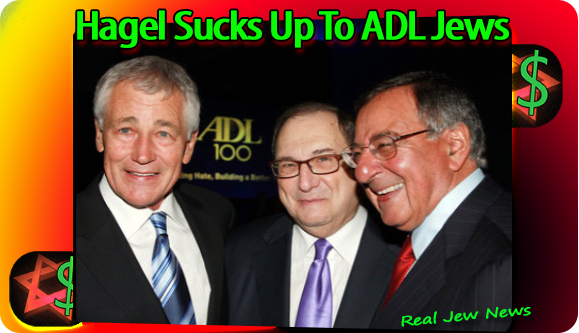 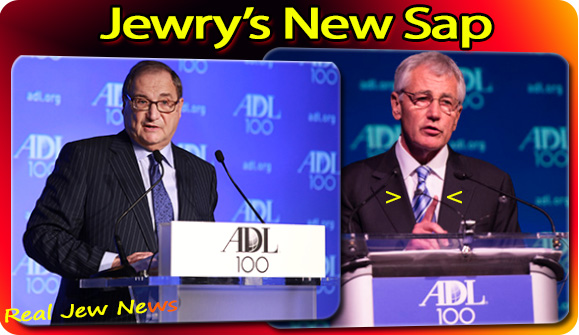 IF THERE IS A SAP more contemptible for his efforts to please warmongering Jews then that sap is Secretary of Defense, Chuck Hagel.


Once vilified by the Jews for his censure of the overweening influence of the “Jewish Lobby” on Capitol Hill, Hagel is now their willing and eager slave.

Following Panetta who told the warmongering Jews (who love to send Gentile youth to their deaths in wars for international Jewry) that the “US may have to use military force against Iran,” Hagel chimed in with words the hateful Jews were just itching to hear.

Sporting a tie with Israeli-flag overtones, Hagel groveled before the crowd of bloodthirsty Jews at the Anti-Defamation League’s 100 year anniversary meeting in NYC.

Conjuring up images of the “Holocaust” regarding the ‘Iran threat’ based on his recent visit to the Yad Vashem shrine of US political passage, Hagel used all the right buzz words aimed at insuring favorable press by the Jew-owned Main Stream Media: 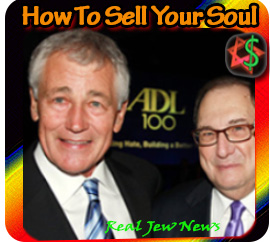 “Our common security interest is preventing Iran from obtaining a nuclear weapon.

“Iran is a state sponsor of terror, spreading hatred and extremism throughout the region.

“Engagement is not appeasement nor is it about containment. We know what those are and won’t pursue them. Action must match words.

“We understand why this is important. Because we’ve all been to Yad Vashem.” View Entire Story Here.

What Hagel failed to say is that it’s Israel’s accomplice in disrupting stability in the Middle East—Saudi Arabia—that’s spreading “terrorism and extremism” throughout the region.

And Hagel’s reference to the strife in Syria as a “humanitarian crisis” is pure Jewish rubbish and propaganda.

The crisis is a result of the Arab Gulf States, Israel, and the CIA, importing al-Qaeda mercenaries into Syria in order to fragment Assad’s government into competing militias.

“What can a man give in exchange for his soul?” warned the Lord Jesus Christ when speaking about the fires of hell.

If it’s giving up one’s manhood, integrity, and strength of conviction, than there’s no sorrier person on earth than the Jew-beaten, Jew-sycophant, Jew-mastered, Chuck Hagel. 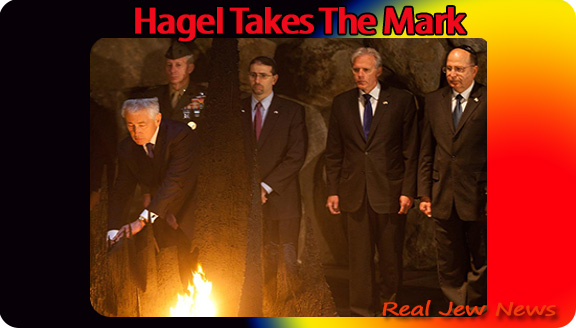 There ARE Solutions that address the overweening power of the insidious Jewish Lobby.

When men like Hagel—of German-American ancestry—who once proudly stated he was “a US senator, not an Israeli one,” grovel before hateful Jews, then it’s time we spell out solutions to the Jewish problem once and for all.

5 Point Plan To Put Jews Out Of Power

1) Require the ADL and AIPAC to register as foreign agents.

5) All Synagogues with Zionist ‘non-profit’ collection boxes or issuing Appeals to financially support Israel must register as foreign agents or lose their tax deduction status.

DO WE WANT more ‘Chuck Hagels’ to suck up to the Jews in our Jew-infested political landscape?

No! It’s time we put HATEFUL JEWS out of power once and for all!