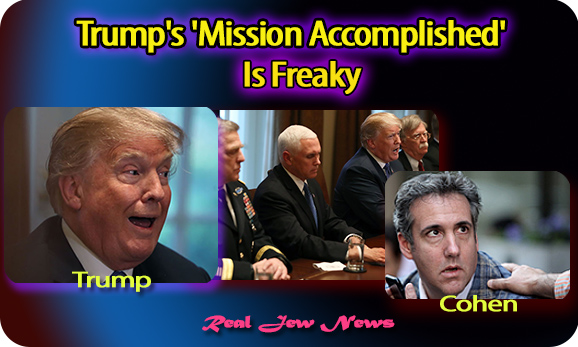 ‘MISSION ACCOMPLISHED!’ bragged Trump the morning after his attacks on Syrian bases in Damascus which included a civilian research facility.

Indeed, like all midnight ‘one night stands,’ there’s got to be a morning after.

That ‘morning after’ for Trump is his use of the same banner, “Mission Accomplished,” that Bush used in 2003 when announcing that combat operations in Iraq had ended six weeks after the invasion.

But the war dragged on, that very same interminable war that Trump blasted as “stupid, very stupid,” while on the campaign trail.

Now we’ve got another ’stupid’ interminable conflagration, this time in Syria that Trump is signing his name to.

And Trump’s entrenchment in the US-supported terrorist-ridden region (in spite of his sly two-faced pledges to his ‘America First’ supporters to pull out of Syria) looks like it’s going to be a very long morning after that reaches far into the night. 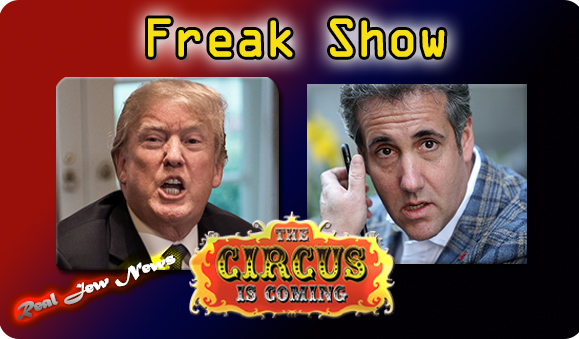 TRUMP SLAMMED the Iraq War for its huge expense with nothing to show for it.

But he can’t tell us how launching 100 Tomahawk missiles Saturday morning (70 of which Syria picked off) at the cost of $1.8 million each has anything to show for it.

The Pentagon hoped to flush out Russia’s integrated S-400 surface-to-air missile network through the air strikes so as to gather coveted electronic data on them when they activated to meet the threat. However, this objective failed. Russia didn’t take the bait to fully activate their shield.

As a consequence, Russia announced it will reconsider “delivery” (already sold) of the S-300 missile defense systems to Syria and other allies that it originally held up. (IsraHell ain’t happy about it, which means further entanglement by US troops.)

And now that three backstabbing Western powers unilaterally decided to belligerently and aggressively attack Syria without reason on a bogus justification, those balmy days of Russian courtesy and accommodation to treacherous “Western partners” are over.

The Russian Ambassador to the UN, Vasily Nebenzia, told Sheldon Adelson’s marionette, Niki Haley, to her lock-jawed face, ‘We are not particularly keen to be friends with you.’

And soon enough, Trump’s claim—sans any evidence—that ‘Assad gassed his own people’ as justification for his strikes, will come back to deprive him of being a friend of truth. (Impossible for a conman like Trump.)

History will expose Trump’s falsehood as a ploy to please the Jews who hope to see Syria demolished so as to expand the genocidal boundaries of their antichrist, apartheid State of Israel eastward to the Euphrates. 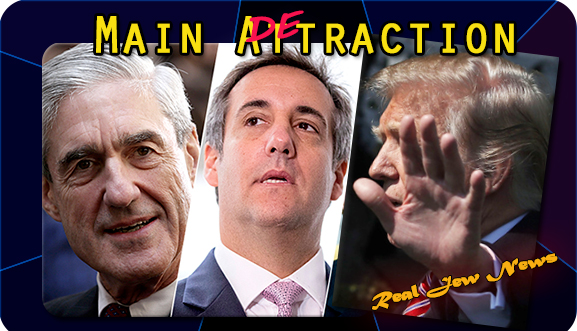 THE FREAKY PART of Trump’s potty-mouth swagger is his showboating attempt to swerve attention away from his personal and legal problems.

A few hours before Trump announced the strikes, Trump tried to block prosecutors from reading files that were seized by the FBI from his personal lawyer and fixer, Michael Cohen.

Finding himself isolated in mounting a response, Trump is now struggling to hire a new criminal lawyer, of which many candidates fear being dragged into a criminal investigation of their own, just like Cohen.

Trump accomplished nothing so far, just as his ‘accomplishment’ in Syria scored a big ZERO.

In fact, the opposite:

1. The Syrian people—both Shia and Sunni, Christians and Druze, and secular folk—are more united than ever.

2. Russia is determined to vindicate its sacrifices in Syria that destroyed the power of ISIS (which Israel is sad to see occur, for it needs a fractured anti-Zionist country on its border).

3. Iran will expand its alliance with Russia in preventing a Jew-enabled US attack on its country.

The real ZERO is that all the reasons Trump was voted into office have amounted to zilch.

Such is the fate of a country run by Jews.

Democracy is an auction awarded to the highest bidder. And Trump is doing Jewry’s bidding straight from the Oval Office.