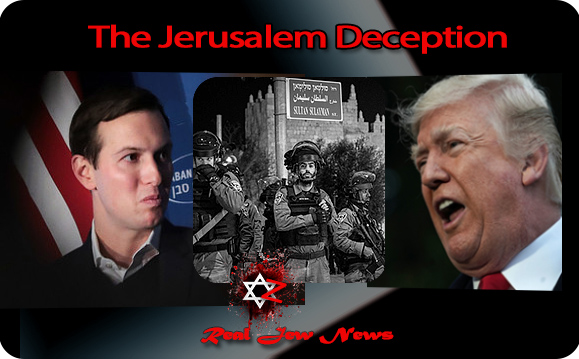 WHATEVER THE JEW WANTS the Jew gets, by fair means or foul. And no matter how one slices up the matzah ball, the Jew eats it all.

For what’s missing in every missal on Trump’s recognition of Jerusalem as the ‘eternal capital’ of the ‘ever-interrupting Jew’ is the boundless nerve of international Jewry to have it their way at the expense of everyone else.

And bending to Jewry’s will whether it’s a puppet in the White House or on Capitol Hill is DC’s way.

Surely the dispute over Jerusalem can easily be resolved once this is grasped. And once the ‘for fear of the Jews’ stratagem no longer spooks the gullible goy, a peace process imposed on the Zionist scoundrels can uncomplicatedly crystallize.

First and foremost, one needs to see that splitting Jerusalem is not going to work…and even if it is workable, is anyone so suckered in as to think the Jews will allow it?

Be assured that divvying up Jerusalem into two capitals—one for the Jews in West Jerusalem and the other for the Palestinians in East Jerusalem—is simply a worm-ridden apple fed to the Arabs to keep them begging at the peace table for a few crumbs of non-contiguous shreds of the West Bank falling from Jewry’s foul-smelling mouth.

And dangling the prospect of two ’sovereign states’ existing in a constrained space ranging only 71 miles from the ‘river to the sea’ is yet another blindfold wrapped around the Arab people’s eyes.

The Palestinian Territory is already reduced to an isolated, walled off, land-based archipelago nation-state under a tight, brutal military occupation.

IT CONTINUES TO DISAPPEAR like a broken string of pearls, thanks to the relentless and vicious state-sponsored illegal Jewish settler movement constantly gnawing at what little land and resources the Palestinians have left.

Jewry never wanted two states, always planned against it, and distorted the clear and unequivocal meaning of the UN Resolutions in order to squeeze it out of the the Zionist gimme-it-all scheme.

That’s why they came up with the Oslo Accords to make the Palestinians think they had a chance at ‘final status.’ The only ‘status’ it brought was positioning the PLO to do Israel’s policing for them.

And while keeping the PLO occupied with police work in their own towns and villages, Israel assembled an elaborate system of surrounding roads, check points, and imprisoning walls, all designed to corral the Palestinians into concrete and barbed wire cattle pens.

Why don’t the goyim get it? Do they think Jews are like them? Straightforward, forthcoming, without guile?

This is not the Jewish way. For by deception the Jews wage war. Just ask any Mossad agent posing as a plumber at the CIA. 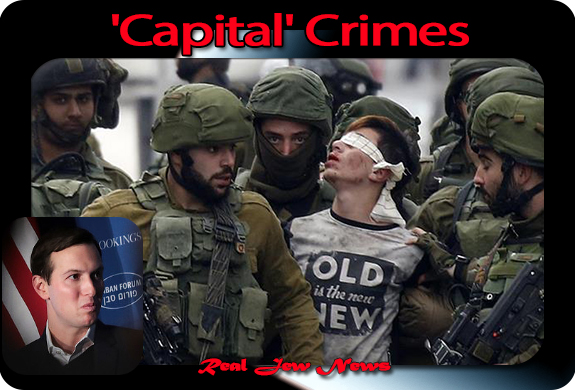 EVERY ‘FREE-THINKING’ JEW pushes the ‘two-state’ solution since it gives the impression that the ‘Jewish people’ are a reasonable and peace-loving ilk.

Don’t fall for it. Every ‘free-thinking’ Jew knows that the Zionist project and Palestinian nationalism are incompatible, unworkable, and just another cause to trifle over.

Why can’t these ‘free-thinkers’ bring themselves to say, “The land was stolen, the wells were poisoned, the Arabs were murdered, give them back their land?” Because it incriminates the Jew. Admitting guilt is not the Jewish way.

(It’s impossible for the Jew to say, “We planted evergreen forests to bury the incriminating remains of hundreds of Palestinian villages and landmarks we destroyed.”)

Neither can Trump say it, for with Sheldon Adelson and the entire troublesome tribe hanging over his shoulder ready to pounce on him with their Jew-owned press if he does, the deal-maker will stay on the ‘winning’ side. That’s Trump’s way. He’s all about ‘winning’ you know.

One glance at Trump’s mumbo-jumbo in his Jerusalem speech, (written by Kushner no doubt), reveals a chock full of Jew-concocted hokum-pokum:

We are not taking a position on any final status issues, including the specific boundaries of the Israeli sovereignty in Jerusalem or the resolution of contested borders. Those questions are up to the parties involved.“

It’s a ruse, a deception, the Jerusalem deception.

For by Trump announcing that America recognizes “Jerusalem” as Israel’s capital, (all of it, implicit in the word, “Jerusalem,”) Trump affirmed the illegal, unilateral annexation of the entire city of Jerusalem touted by the Zionist Nationalists since 1967 as the “undivided capital of the Jewish people.”

The devil’s in the details.

Trump recognizes Jerusalem…and then pussyfooting about ‘contested borders,’ ‘final status issues,’ ‘not defining specific boundaries,’ he dangles a carrot before the Palestinians to keep the peace process scam on life support.

By saying, ‘those questions are up to the parties involved,’ (while he can’t bring himself to even name the “Palestinians”), he pleases his paymasters by dragging out the impossibility for Jewry to ever decide anything other than what’s good for their own party.

ONLY A ONE STATE SOLUTION for both parties—with equal citizenship, equal civil and political rights, equal representation, equal ownership—can unclothe and redress the Jerusalem deception.

Israel’s raison d’etre as a state has always been that there should be a separate country, a refuge, exclusively for Jews.

Yet we don’t see Jews racing to Israel just dying to get in, do we? Jews prefer Matzah in Manhattan to Latkes in Lod.

All of this strengthens the lawful reasons why the Right of Return for Palestinians with full reparations and restoration of their lands based on UN Resolution 194, supported by four bodies of International Law, should be collectively enforced.

Consequently, a drawback to the One-State Solution surfaces: the Jews will leave in droves.

Block them in! Let the Palestinians rule over them. What a refreshing change it will be!

For to whatever country the Jews will flee…its ruin is guaranteed.

For More See: The Kushner Plan That Plopped Here